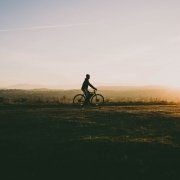 Big Island residents are taking advantage of free, unlimited bicycle rentals that have been offered during the pandemic.

Tina Clothier, interim executive director of Peoples Advocacy for Trails Hawaii, or PATH, a West Hawaii-based bicycle and pedestrian advocacy group, said the organization initially considered halting its bike share program in March, “when it became clear that we were, in fact, in a pandemic.”

At the time, a majority of ridership was visitors, she said.

Instead, Clothier said after contacting Mayor Harry Kim’s office, the county asked if the program could and would offer free subscriptions to Hawaii Island residents for three months.

According to Clothier, the county was able to help PATH secure funding from the county Parks and Recreation Department as well as a $10,000 grant from the national nonprofit organization People for Bikes to offer the service.

They can pay per single 30-minute ride, purchase a five-hour block of ride time that can be used any time, or purchase membership subscriptions that give users unlimited 30- or 60-minute rides per month.

Free subscriptions were initially offered to residents through April, May and June, and ended in July.

Clothier said the free memberships were extended through August with the help sponsors Bike Works Kona and Bike Works Beach and Sports, and through September because of sponsors Nick Nelson and Velofix Hawaii.

By the end of June, Clothier said 645 people had signed up for the free program, called Stay Healthy Hawaii.

“We had a great response, and were thrilled with the response,” she said. “We feel as though because of this program, Hawaii Island residents really feel an ownership of the bike share program.”

The bike-share program launched in Kailua-Kona in 2016 and expanded to Hilo in August 2019.

In 2019, Clothier said the bike share program had 9,151 rides, most of which were taken by visitors.

Just 1,095 were taken by monthly subscribers, but most of those rides were taken by visitors who used the bikes frequently during their stays, she said.

Last year, just 30 of the 128 subscribers were Hawaii residents.

Currently 629 people are members of the free program.

According to Clothier, bikes are sanitized twice daily by the county’s Cleaning and Disinfecting Task Force, also known as the “Bug Busters.”

In Hilo, stations can be found near the bandstand at Mooheau County Park, on Banyan Drive across from Lili‘uokalani Park and Gardens, at the Grand Naniloa Resort and at the County Building.

All rentals require credit card information, which Clothier said ensures users return the bikes and that PATH has recourse if the bicycle is lost or damaged.

PATH is actively seeking sponsors to keep the free program going through the end of the year, Clothier said, “because it’s clear COVID-19 is going to be with us for a while and we want to make sure people are able to use the service if they find it valuable to exercise or community and (to) just keep people riding.”

For more information about the bike share program, visit hawaiiislandbikeshare.org.