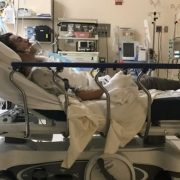 This past October, Blake Chastain, a 17 year-old high school student had to be rushed to a nearby hospital by helicopter where doctors rushed to save his left eye, treat the second degree burns on his hand, and brace his mouth for teeth that had been knocked out, broken and pushed back.

He was not the victim of street gang violence or a tragic bullying incident, Blake was the latest victim of a popular trend rising among high school students across the country: vaping. E-cigarettes, vape mods and pens explode at least six times per month in the United States resulting in severe to minor injuries 70 percent of the time, according to a new study released by the U.S. Fire Administration. The report analyzed data from 195 total reported incidents of fires and/or explosions caused by e-cigarette and vape devices over an eight-year period starting in 2009. 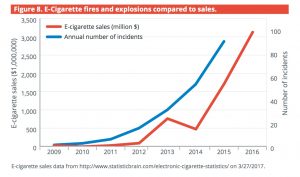 While e-cigarettes, vape mods and pens have been on the market in the U.S. since 2007, sales didn’t really start picking up until 2014. Of the 195 incidents of fire and/or explosions, only 49 occurred between 2009 and 2014, and then the number triples to 146 in the two-year period from 2014-2016. This spike in explosive incidents matches a similar spike in sales during the same time period. One of the conclusions made in the report by the U.S. Fire Administration is that “as long as lithium-ion batteries continue to be used, severe injuries will continue. As the number of e-cigarettes in use increases, the number of severe injuries from battery explosions and fires will likely continue to increase.”

Other interesting findings in the report were an analysis of the status of the e-cigarette when the incident occurred. Of the 195 incidents contained in the report, 121 or 60 percent of those fires and/or explosions occurred while the device was either being used by the victim or in their pocket. Of the 133 incidents resulting in personal injury, 40 percent of those were “moderate” requiring treatment in the emergency room for smoke inhalation, second-degree burns and lacerations requiring stitches. Nineteen percent of incidental injuries were described as “severe”, requiring hospitalization or resulting in the loss of a body part, third degree burns or facial injuries.

The injuries suffered by Blake while awful are not the most horrifying. A casual Google search will show all kinds of victims suffering loss of fingers and/or disfigurement from fire, battery acid and shrapnel. These injuries are, however, totally avoidable as there is currently no regulation, code or law applied to the safety of the lithium-ion batteries in e-cigarettes. Nevertheless, Blake says he’s “thankful to be alive” and “doesn’t even want to be in the same room” as an e-cigarette again.