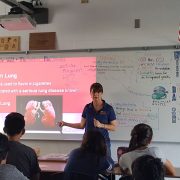 The Tobacco-Free East Hawai‘i (TFEH) Coalition has been educating youth about the harmful effects of smoking and second-hand smoke for the past 15 years. Since 2003, we have seen the youth tobacco use rates drop significantly, from 22 percent of high school students smoking at least one cigarette daily to 9.7 percent in 2010 (DOH BRFS). As that number continues to decline, we have seen an alarming increase in the use of the elusive ESD, or electronic smoking device, in East Hawai‘i. 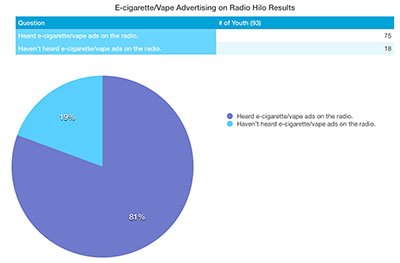 Radio advertising for ESD products is rampant in Hawai‘i County. According to recent data collected from Hawai‘i Public Health Institute staff, Hawai‘i County youth heard more radio ads than the rest of the state, with a staggering 81 percent of those surveyed being exposed to radio advertising, as seen is the graph to the right.

We have worked hard this year to educate and keep up the fight against tobacco industry through education and empowerment of our people, especially the youth. In December 2016, TFEH in partnership with the Daniel K. Inouye College of Pharmacy (CoP) piloted an age-appropriate ESD Prevention presentation at Hilo Intermediate School.

TFEH staff, Sally Ancheta, and pharmacy students also created a curriculum to educate students about the myths and facts of ESDs. The curriculum addresses the marketing tactics, discusses the different chemicals and potential harms of the ESDs, and includes a game of grudge ball to reinforce the knowledge that was presented.

Every presentation ends with TFEH’s pig lung display, where students see how formaldehyde, a chemical commonly found in ESD oil, is used to preserve dead tissue. Since the pilot presentations, the ESD prevention curriculum was delivered to multiple intermediate schools in Hawai‘i County, both public and private, reaching over 900 students in the past year.

To learn more about why youth are able to posses ESDs, even with the state law in effect, we reached out to the community, public health educators, tobacco treatment specialists and several DOE middle and high school teachers to get some insight into the problem in East Hawai‘i. We discovered youth are accessing ESDs through parents and family members. According to a 7th grade Health/PE teacher at an East Hawai‘i Intermediate school, “I have seen students using e-cigs on and off our campus. I caught an 8th grader smoking with a 10th grader in our school parking lot. The 8th grader said that his mom lets him smoke and it’s been confirmed! I’ve also seen many high schoolers smoking after school outside of our fence. Many of my 7th graders know students who are smoking e-cigs.”

There is a growing misconception that ESDs are safe. Students feel that it looks cool and many say they enjoy the sweet smell of the vapor, which makes ESD prevention presentations even more critical. Information is power and the more information students have on ESDs, the greater their ability to make better decisions.

And the youth are getting the message, one East Hawai‘i Youth Council member reflected, “I’m going to be real honest with you. I tried vaping. I thought it wasn’t a really big issue until I saw that presentation with Auntie Sally. I didn’t know there was nicotine in it, or all those other chemicals. So once I saw that, I got rid of everything and I told other people not to try it.” There is much work to be done and we welcome anyone interested in joining and supporting the fight.

To get involved, email Sally at sally@hiphi.org.

Elected Official Survey Results Are In!
Scroll to top