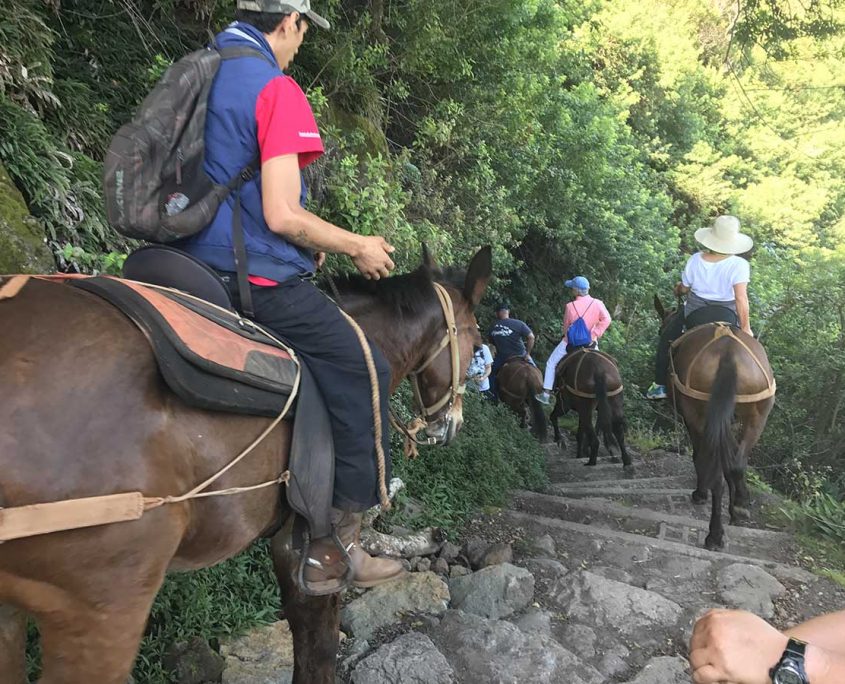 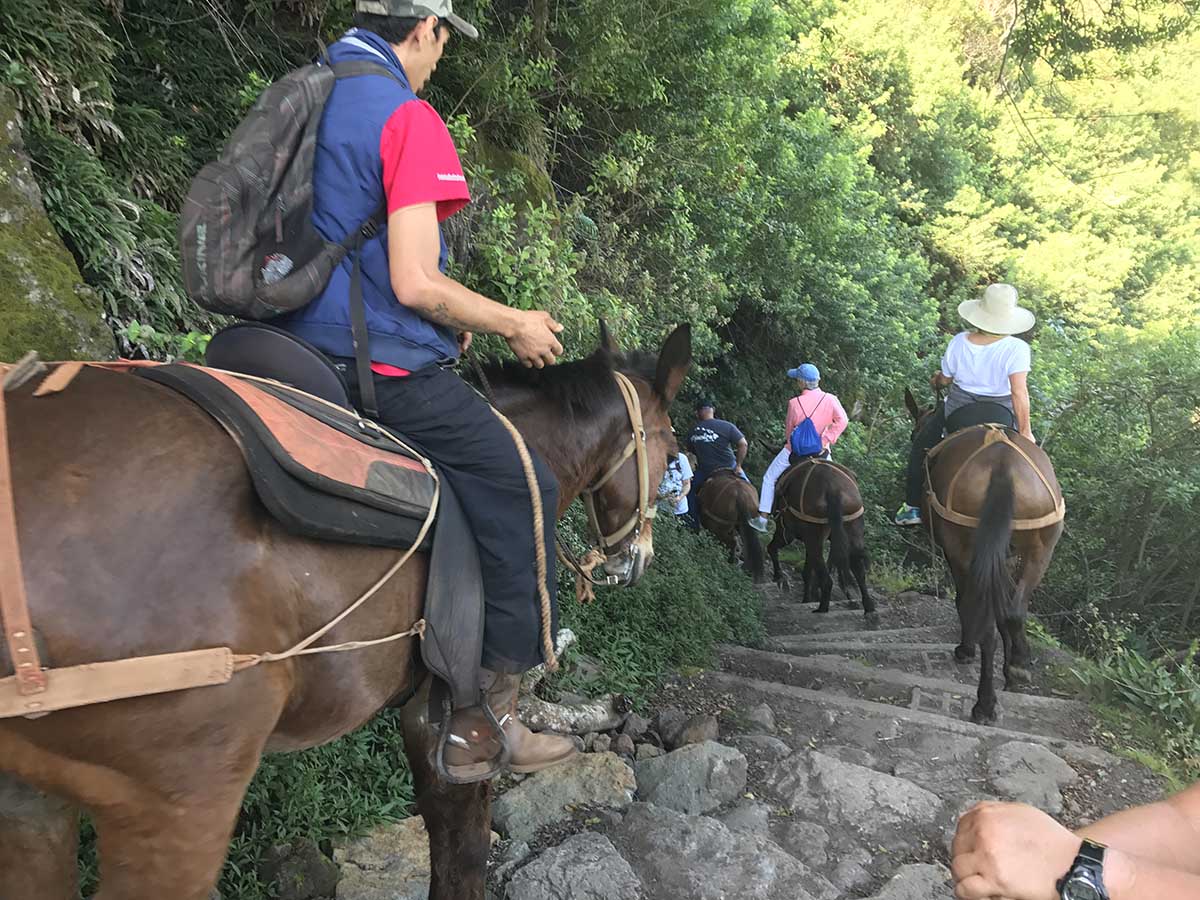 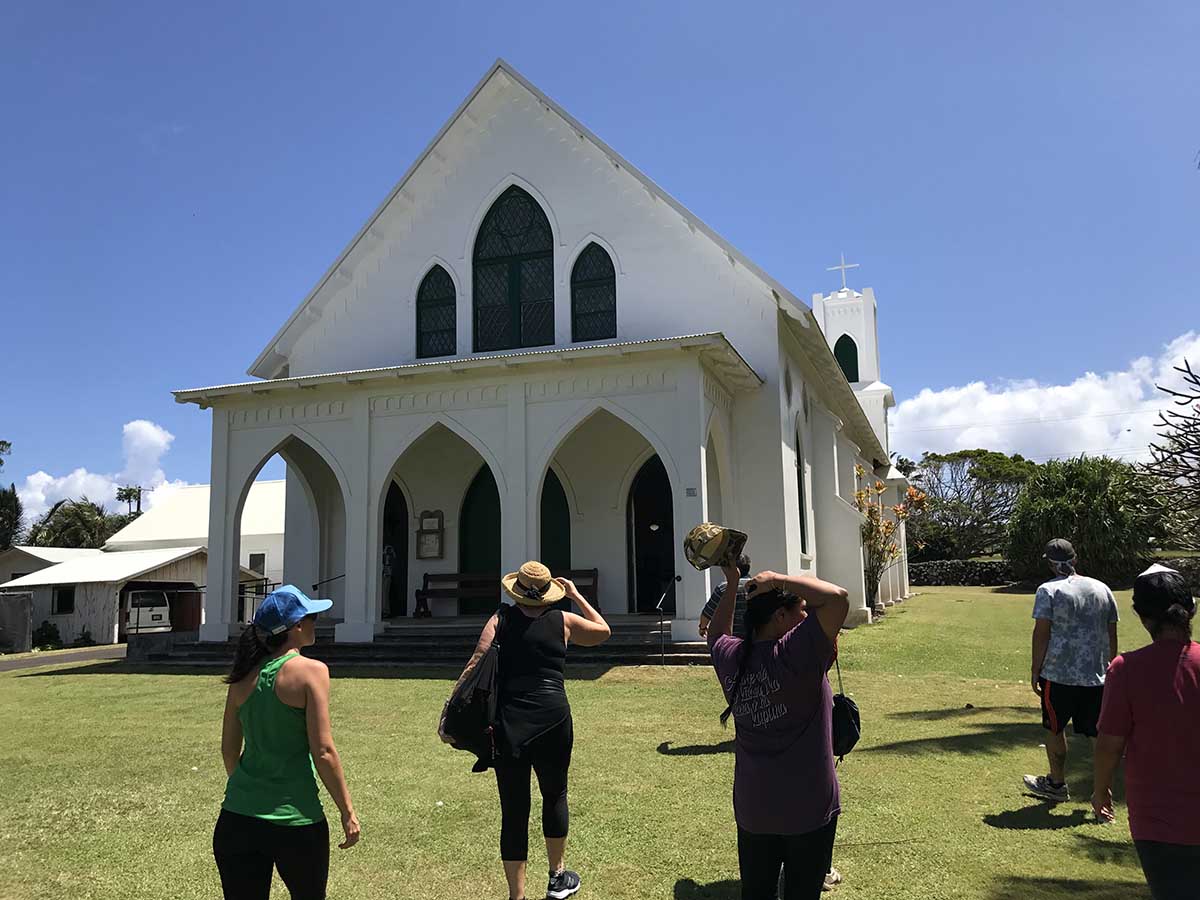 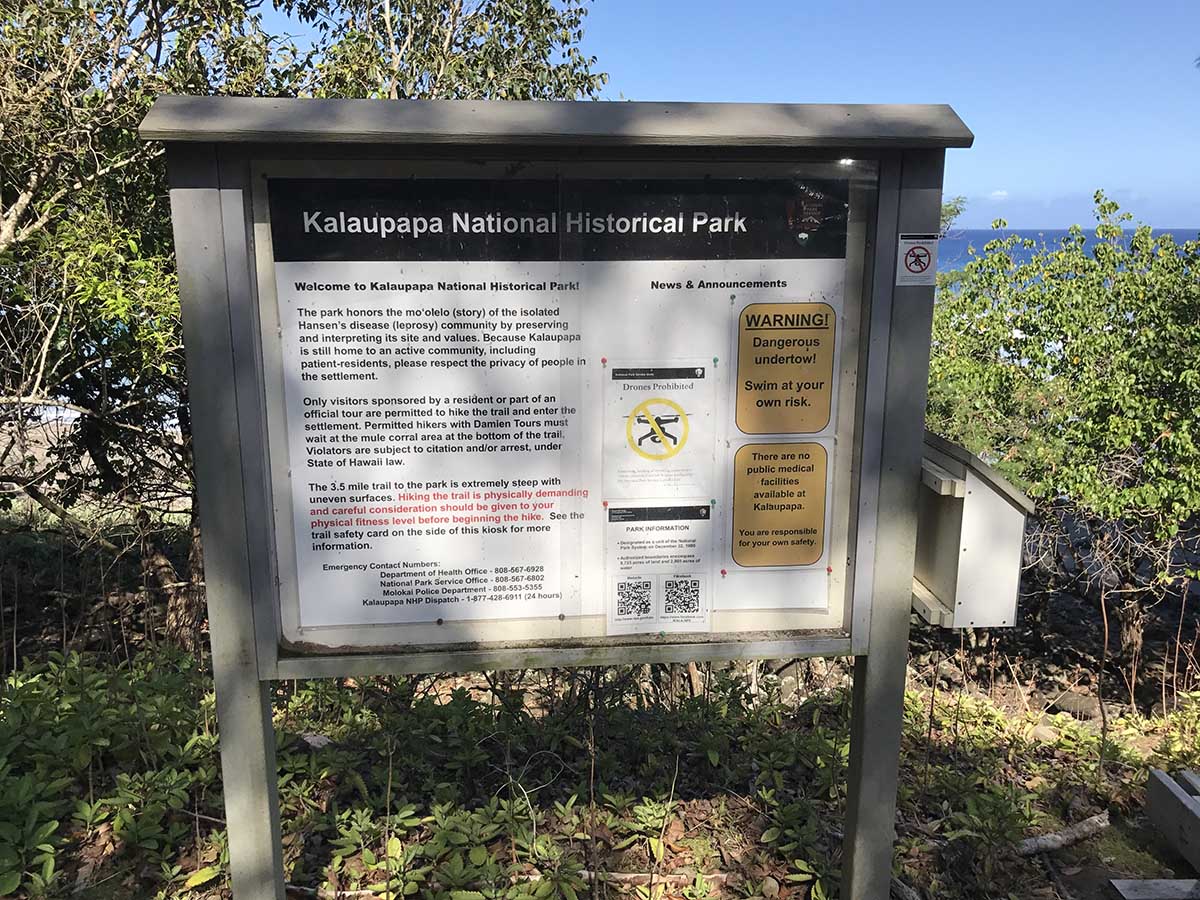 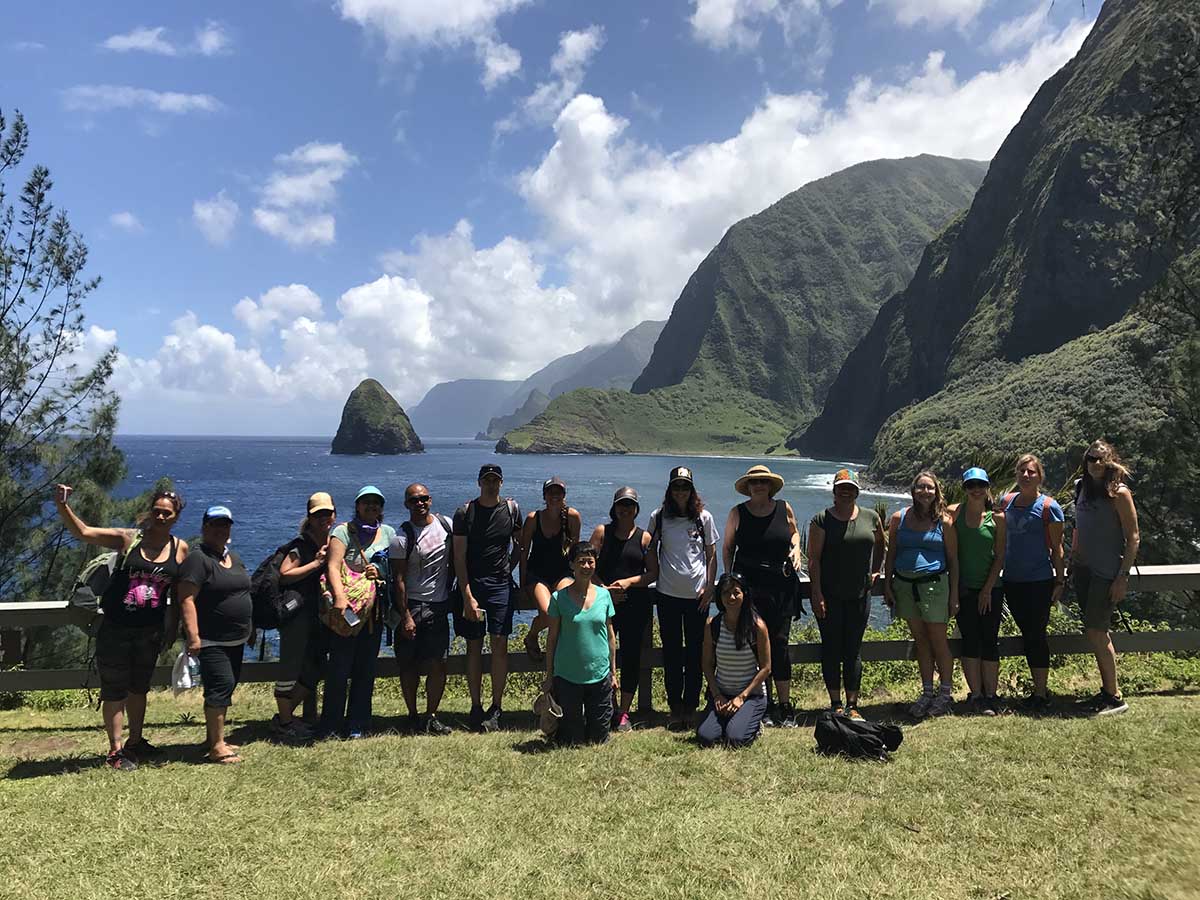 It’s easy to find who you’re looking for at Ho‘olehua Airport on Molokai, which is a good thing when a group of 17 people need to meet up there, most of whom have never met. That’s how our Community Perspectives trip to Kalaupapa began.

Luckily, everyone made it and no one’s flight was delayed – a small miracle. Once we had all gathered and found our assigned vans, we set off to the trailhead leading down to Kalaupapa on the north shore of the island. Introductions were made and we were led through a grounding ceremony and pule by thePūʻā Foundation before we headed down.

The Pali Trail, for those who have never hiked it, consists of 3.5 miles of switchbacks and stairs descending down the face of a sheer sea cliff. It’s breathtaking, and challenging. But we all made it down in one piece!

The Damien Tour bus was waiting for us on an open sea grass field behind the Quonset hut in the village, along with three more participants who had flown directly in to Kalaupapa. Once we were all on board our tour guide, Steve, began to tell us about the tragic past of this now beautiful, serene settlement.

To parse the history of Kalaupapa into a brief paragraph would be too difficult, so we will defer to the words of the patients themselves to tell part of their story here:

On the night of the 4th day of January 1879 about seven p.m. I with 11 other fellow sufferers were lined up in two by two file by our jailer (each of us carrying our own baggage) guarded on each side by a squad of policemen were taken from the leper detention station…and put aboard the SS Mokolii lying along side the pier at the foot of Fort Street. After a half-hour wait for two Government Officials, Sam G. Wilder President of the Board of Health and Dr. N.B. Emerson newly appointed first resident physician of the Leper Settlement of Kalawao. When they arrived and came aboard the steamer the line was cast off, the steamer moved out into the harbor and steamed out to sea bound for Molokai and arrived off Kalaupapa the next morning 7 a.m. when the steamer anchored we entered a row boat with the two officials and rowed to the Kalaupapa landing and put ashore and [were] received by the local officials of the Leper Settlement. After our names, ages and places we hailed from were taken down, left on the rocky shore without food and shelter. No houses provided by the then Government for the like of us outcasts.

Deaths occur quite frequently here, almost daily. Napela [Mormon elder and assistant supervisor of the Kalaupapa Settlement] last week rode around the beach to inspect the lepers and came on to one that had no Pai for a week but manage to live on what he could find in his Hut, anything chewable. His legs were so bad that he cannot walk, and few traverse the spot whare his hut stands, but fortunate enough for him that he had sufficient enough water to last him till aid came and that not too late, or else brobably he must have died.

Like the other patients, they caught me at school. It was on the Big Island. I was twelve then. I cried like the dickens for my mother and for my family. But the Board of Health didn’t waste no time in those days. They sent me to Honolulu, to Kalihi Receiving Station, real fast. Then they sent me to Kalaupapa. That’s where they sent most of us. Most came to die.

These and other personal stories can be found on the National Park Service website.
Once the tour bus departed, it took us through the current settlement of Kalaupapa on the west side of the peninsula, stopping at Fuesaina’s Bar and the Catholic church, and then continued on to the original settlement at Kalawao on the east side of the peninsula. Here we stopped for lunch and our group held a talk story session.

The reason we chose Kalaupapa for this perspectives visit was twofold; we wanted to highlight the community, history, and current work happening in Kalaupapa, but we also wanted to offer support in the planning of a series of  upcoming National Park Service health fairs. Our talk story session was to generate ideas and resources for the park in collaboration with Na Puuwai as they plan these ongoing wellness days. It was a short but fruitful conversation that generated some wonderful discussion about community voice, the social importance of group activities, the concept of edible landscapes and a focus on the community garden, and the importance of prevention and physical therapy, to name just a few of the talking points.

After lunch, we visited St. Philomena church and the original grave of Father Damien, while some participants took a moment to mediate in the shade of the trees that stand where the old Baldwin Home for Boys was once located. We then returned to the current settlement to visit the Bishop Home, where Mother Marianne Cope provided shelter for the girls in Kalaupapa.

At last, it was time for us to head back. We drove out to the tiny Kalaupapa airport to drop off those who were flying home, and the rest of us were returned tot he trail to begin our hike out. Going down is hard on the knees, but going up is hard on everything else! But once again we all made it, and along the way we enjoyed the views and the accomplishment.

This community perspectives visit was indeed something extraordinarily special.  To have the privileged of visiting a community that once endured tragedy, horror, and sickness, but is now a place of healing, hope, and health, is beyond words. What was once a “beautiful hell” as stated by our tour guide, is now truly beautiful.

We want to thank the National Park Service, Na Puuwai, and Damien Tours for helping us to make this visit and the upcoming Kalaupapa wellness days possible. And we thank all the public health professionals who joined us for this trip, as well as their organizations for the work they are doing to make our communities healthier.