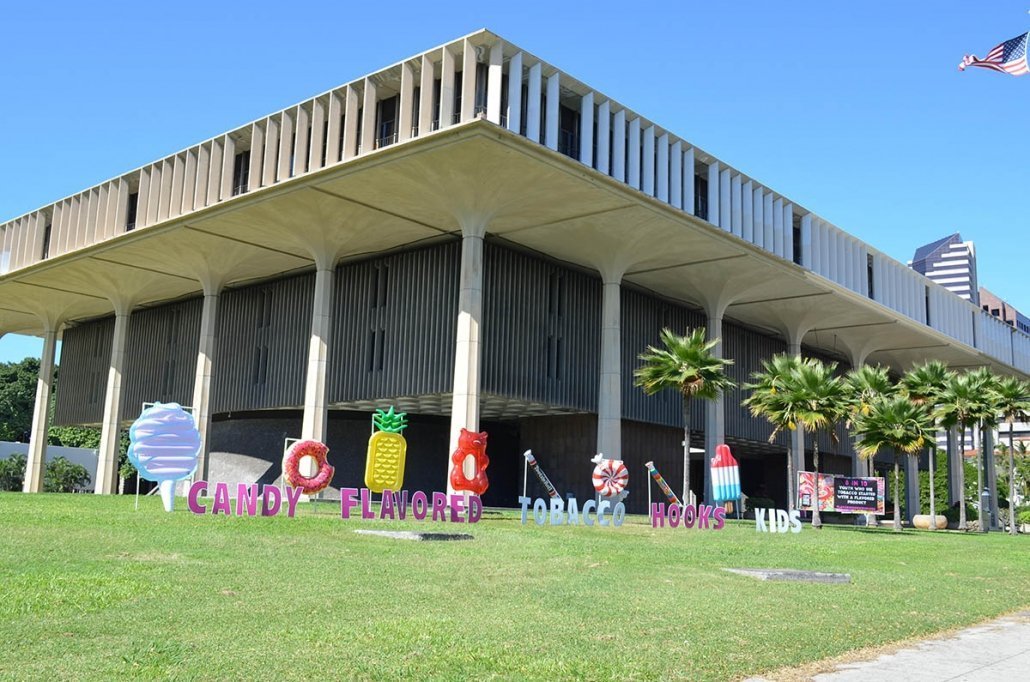 Coordinated by Coalition for a Tobacco-Free Hawai‘i, a program of Hawai‘i Public Health Institute (HIPHI), the visual display puts the spotlight on legislation (SB1009/ HB276), introduced by Senator Rhoads and Representative Takumi, that would end the sale and distribution of flavored tobacco products, including menthol. The prohibition has been endorsed by more than 100 organizations, businesses, schools, elected officials, and influencers. Find the full endorsement list here.

“We know that 8 in 10 youth who use tobacco started with a flavored product,” said Lieutenant Governor Green, who is also a physician and concerned with pulmonary health. “And we know that the only purpose flavors such as Rocket Popsicle and Fruit Hoops have is to hook our kids on nicotine so that they become lifelong customers.”

Prohibiting flavors in tobacco products is the top priority for Coalition for Tobacco-Free Hawaii’s Youth Council members who have been meeting with legislators and speaking to classrooms and assemblies of their peers about the dangers of vaping. Their message: the future health of young people who vape is not promising. The highly-concentrated nicotine in e-cigarettes is a direct threat to the developing brain, interfering with thinking, behavior, and impulse control.

“We are being targeted,” said Alexis Cortes, a senior at Hawai‘i Pacific University. “With more than 15,000 flavors like Molokai Sweet Bread, Auntie Li Hing, and POG, and packaging that looks like candy, vaping companies are clearly trying to hook me, my peers, and generations to come.” Alexis also points out that youth who vape are at greater risk for anxiety and depression and are 10 times more likely to end up smoking.

Youth Council members and media students have also been creating video ads, assisting with #BreatheAloha school murals, and spreading the word about the dangers of vaping as part of HIPHI’s statewide #808NOVAPE campaign. The video and audio ads have been running on social media, on the radio, and in theaters across the state since June 2018.

“The youth vaping epidemic is serious and jeopardizes the progress Hawaii has made in tobacco prevention and control,” said Health Director Bruce Anderson. “Youth who vape are more likely to transition to regular cigarettes or become dual users. In this way, vaping is bringing back tobacco as one of the greatest public health threats to our state.”

Research shows that tobacco companies deliberately market menthol products to minority populations, most notably African Americans and Native Hawaiians. They have been very effective, with nearly 8 in 10 Native Hawaiians who use tobacco preferring menthol. SB 1009/ HB 276, if enacted, will end the sale and distribution of these menthol tobacco products as well as the thousands of fruit- and candy-flavored tobacco and vape products that are hooking our kids.

Learn more about how Flavors Hook Kids at https://flavorshookkidsHI.org

Coalition for a Tobacco-Free Hawai‘i, a program of Hawai‘i Public Health Institute, is a national trailblazer in reducing tobacco use through education, policy, and advocacy.