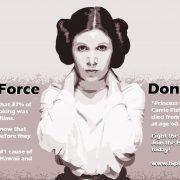 Numerous studies have shown that smoking in movies makes teens more likely to try smoking. In fact, a review study suggested that as much as 37 per cent of youth smoking initiation is due to smoking in movies. The U.S. Surgeon General has concluded that this is causal, and that simple ratings changes could reduce the number of teen smokers by nearly one in five (18 per cent), and prevent one million deaths from smoking among U.S. children alive today.

In Canada, the ratings systems are even worse, with 86 per cent of movies featuring tobacco use being youth-rated (smokefreemovies.ca).

Carrie Fisher was a lifelong smoker who died at age 60 from a sudden heart attack. Tragic, but unfortunately all too typical an outcome. She had also fought mental health and addiction battles. The prevalence of smoking is disproportionately elevated in both of these groups, and despite being traditionally viewed as their “lesser problem” during life, it most often ends up being the cause of their deaths. Many mental health professionals have now begun to address nicotine addiction head-on in their patients as a result.

Carrie Fisher’s death, while very sad, can be turned into a meaningful public teaching moment.

Read the full article online at the Vancouver Sun.