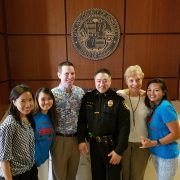 O‘ahu is one step closer to having smoke-free cars for keiki! Introduced by City and County of Honolulu Council Chair Ron Menor and Councilmember Brandon Elefante, Bill 70 would prohibit smoking and vaping in vehicles when a minor is present. On August 22nd, it passed the Public Health, Safety and Welfare committee unanimously. And, on September 7, the bill passed a full city council meeting and its second reading.

Although all councilmembers ultimately voted to pass the bill out of committee, there were moments where it seemed like the bill was in danger. At one point, Councilmember Ernie Martin shared that he had planned to vote “no” on the bill because he felt it was common sense and that he was concerned about privacy… until a fellow-gym member asked him to vote “yes” to protect his two young grandchildren that are exposed to secondhand smoke in the car.

Several concerned private citizens, Hawai‘i State Department of Health, and the Coalition for a Tobacco-Free Hawai‘i also came out in strong support of the bill. The presence of the Honolulu Police Department was also critical, as they helped to answer questions about enforcement.

We are excited that smoke-free cars is moving through the Honolulu City Council, but it still has several hurdles to clear before it can become law. It must now pass a second review by the Public Health, Safety and Welfare committee and a third reading before the full council. To get it over the finish line, it’s crucial that the council continues to hear stories from the community about the importance of this law!

Please sign-up for our e-mails to receive updates and instructions on how you can support smoke-free vehicles in Honolulu and statewide.

A garden of discovery on the Big Island
Scroll to top