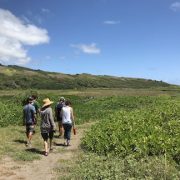 The Waihe‘e Coastal Dunes & Wetland Refuge is a beautiful 277-acre property fronting the Waihe‘e Reef on Maui’s north shore. The property is owned and maintained by the Hawaiian Islands Land Trust (HILT), which has restored a large portion of the land to a native wildlife habitat while also preserving the abundant archaeological and cultural features present.

This area of Waihe‘e was and still is a vital cultural and ecological resource for our community. Our tour, a small group of Maui residents ranging from private business owners to UH faculty, was led by the HILT Associate Executive Director, Scott Fisher. He led us from the historic dairy and dilapidated doctor’s house at the east end of the property to the ancient village and fishpond site toward the west end along the coast, and then back along the base of the large sand dunes that enclose the refuge.

This area is one of the earliest sites of human occupation known in the Hawaiian Islands, dating to approximately 1000 years ago. Several heiau are documented on the property, and Kapoho village was located along the shoreline from the 1400s – 1800s. Adjacent to the village was a freshwater fishpond, a loko kalo i‘a, where taro was also cultivated. Scott explained how the geologic formation of the land, through volcanic collapse and Aeolian sand accumulation, created an environment rich in resources for humans and wildlife alike.

The area was overgrown by non-native species when the restoration project began, but the Land Trust’s efforts have paid off. The restored portion of the property is now virtually non-native free and we were able to observe what the traditional environment may have once looked like. The fishpond walls are covered in native naupaka, but you visualize the pond as it once was, with the village and heiau just beyond. Restoration also brought the return of indigenous animal species to the land, including endangered bird species such as the ae‘o (stilt) and ‘alae ke‘oke‘o (coot). Monk seals and nesting green sea turtles have also been spotted utilizing the refuge. Some friendly peacocks joined us for our tour as well, though they are most definitely non-native, a point most definitively made by the HILT staff!

All-in-all, this location encompasses a bit of everything; it is a balance of history, culture, ecology, biodiversity, and it is a vital environmental resource for our community. It is open to the public for hiking and camping, and there is also a freshwater river that is not Iao Stream! A couple of the folks from our tour live in the neighborhood and were very pleased to learn about what was available in their own backyard. It is worth visiting the refuge to see the work that the Land Trust is doing, but also to see the resources available to ALL that HILT is caring for.

Learn more about the refuge at  http://hilt.org/protected-lands/maui/waihee-refuge/ or schedule a tour by calling the Hawaiian Islands Land Trust at (808) 791-0729.