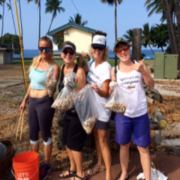 In April 2016, a West Hawaii Partnership Team (5 people) implemented a cigarette butt pick up along Alii Drive in the Kailua Kona Business District. Team members noted a noticeable reduction in the number of butts along the shoreline street when compared to last year. Businesses have also seen a reduction. Yet, the team still picked up 4,836 cigarette butts along the drive in 1 hour and 30 minutes. “Cigarette Butts are Toxic” decals were also distributed to interested businesses in the area. There is still more work to be done.

Unfortunately the “bait tank” cig butt receptacles that were planned for the business district has fallen through. The manufacturer – idea guy stopped communicating in late 2015 and we won’t be able to secure the receptacles. So it’s back to the drawing board! Fortunately, we are moving forward in collaboration with Keep Puako Beautiful and Hawaii Wildlife Fund to find a solution/receptacle that will be utilized in more designated places in West Hawaii. More soon about this project!

After a learning session in late 2015, students from the 7th grade class of Mrs. Manuel decided to help prevent tobacco and e-cig use by developing advertisements. Over 40 ads were developed and are being displayed at the school.

This day started at the Puako boat ramp for a beach cleanup, then moved to Hapuna Beach for an environmental educational session and informational sign construction. This effort helped to fulfill Waimea Middle School’s core values. Students learned about how toxic cigarette butts are to the ocean environment and how cigarette butts can cause wildfires when littered along Hawaii’s highways.   Students created over 25 signs that will be used along the highways and on DLNR properties.

Honoring Anna Mayeda for her hard work and dedication to improving health in...
Scroll to top