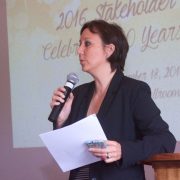 On March 6, the Trump administration and the Republican Congress introduced the American Health Care Act (AHCA), a plan to repeal and replace the Affordable Care Act (ACA), popularly referred to as Obamacare. Since the enactment of the ACA in 2010, over 20 million uninsured individuals have gained health coverage and accessed critical and life-saving care that would previously have been more expensive or unattainable due to a person’s gender, age, or pre-existing condition.

The AHCA bill to replace the ACA is moving rapidly through Congress. Although it preserves some of the ACA’s signature provisions – such as the ban on discriminating people with pre-existing conditions and the provision that allows young adults to stay on their parents’ plan until age 26 – several of the AHCA’s proposed changes are concerning.

The AHCA gets rid of the individual mandate that requires most people to purchase insurance. Without this requirement, healthy people might be less likely to buy insurance while thousands of individuals, including those who are sick and unhealthy can remain uninsured which can significantly drive up health care costs. In fact, the Congressional Budget Office has just released their analysis that by NEXT YEAR, there will be 14 million newly uninsured under the new plan and a total of 24 million people uninsured (who currently have insurance) by 2026.

Funding for Medicaid expansion will freeze in 2020, while funding for fundamental public health programs through the Prevention and Public Health Fund will be eliminated. The latter would cost the state upwards of $17 million in funding to fight chronic disease. For Hawai‘i, the replacement of the ACA could mean the loss of healthcare coverage for thousands of individuals as well as hundreds of millions of federal funding dollars in both Medicaid and public health funding.

The Hawai‘i State Legislature has begun to address these proposed changes by introducing legislation that would ensure that important provisions from the ACA are preserved under Hawai‘i law, including:

The Hawai‘i Public Health Institute (HIPHI) has been testifying at the legislature in strong support of this legislation to protect and preserve the health of Hawai‘i residents. HIPHI also joined more than 500 public health organizations, children’s advocacy groups, universities and local health departments in sending a letter to President Trump last week warning of the consequences of eliminating the prevention fund.

Addressing the repeal of the Affordable Care Act is critical to avoid further straining the health care system in our state. It is important to also address the impact of the loss of the Prevention and Public Health fund and what this means for all the state departments, health centers, and community programs in Hawai‘i.

Cuts in these funds, along with more federal budget cuts at the CDC and other health agencies could mean the loss of important services in disease outbreaks, immunizations, prevention screenings, and chronic disease prevention that are necessary to keep Hawai‘i families and communities healthy and safe. Although the final outcome of the proposed American Health Care Act is still uncertain, we encourage everyone to continue advocating for the protection of health care and public health in Hawai‘i.

Mahalo for your continued support,