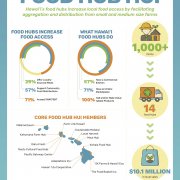 During the 2021 session of the Hawaiʻi State Legislature, the Hawai‘i Farm to School Hui actively monitored and testified on twelve bills and two resolutions related to farm to school. After multiple committee hearings in both the Senate and House of Representatives with input from hundreds of testifiers, along with the requisite floor votes by all legislators, three of the bills were ultimately passed by the legislature and transmitted to Governor David Ige for his consideration. This represents a twenty-five percent passage rate, where typically only about ten percent (200-300) of the thousands of bills introduced each session are passed by the legislature. Both of the resolutions of interest were adopted.

Importantly, HB767 is one of this year’s successful farm to school bills. Because of this legislation, the longstanding efforts by Hawaiʻi Department of Education (HIDOE) schools, administrators, families, and community partners to implement farm to school programming via school gardens, education, and school food improvements through local procurement will be formalized through official establishment of the Hawaiʻi Farm to School Program within HIDOE. This bill also sets the goal of thirty percent local food procurement by HIDOE for school meals by 2030.

Through the final adoption of SCR38 (Senate Concurrent Resolution), both houses of the legislature are concurrently urging HIDOE to require the procurement of goods and services from Hawaii’s food hubs as part of its overall farm to school food procurement strategy. Food hubs increase local food access by facilitating aggregation and distribution from small and medium-sized farms, which in turn supports local farmers to become or remain economically sustainable. Fourteen food hubs that are part of Hawaii’s Food Hub Hui currently aggregate locally-grown foods from approximately 1,100 local farms, enabling them to access larger agricultural markets such as our public school system and connecting students with food growers in their home communities.

Learn more about the Hawaiʻi Farm to School Hui’s work at hiphi.org/jointhehui.