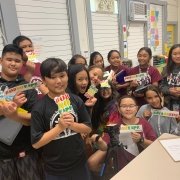 The impact and importance of the 808NOVAPE Campaign has become clearer than ever over the past five months. The 2019 school year kicked off just as the EVALI (E-cigarette and Vaping Associated Lung Injury) outbreak swept across the nation.  808NOVAPE hit the ground running, giving presentations to teachers at Kamiloiki Elementary and parents Samuel Wilder King Intermediate School in the week leading up to the first day of school.

Schools have been actively reaching out to HIPHI to help raise awareness of the youth vaping epidemic, signifying a sense of urgency that was not observed last year. By the end of August, hundreds of youth had received presentations on the health risks of vaping (Washington Middle School and Waimanalo Job Corps Center). During this time, the national EVALI case count had climbed to 300 hospitalizations and one fatality.

During September, the 808NOVAPE campaign was invited to present at numerous important gatherings, from a training for Honolulu Police Department’s Drug Recognition Experts, a Board meeting of the American Heart Association, a High Impact Drug Trafficking Area meeting of the state’s Attorney Generals, Prosecuting Attorneys and Police Chiefs, training for statewide Tobacco Cessation specialists, a Parent Night at Mililani High School and teacher training at Samuel Wilder King Intermediate School to close out the month. Despite a busy September, it proved to be the calm before the storm. EVALI case counts at the end of the month were 805 hospitalizations including Hawaii’s first case, and 15 fatalities nationwide.

By early December, the 808NOVAPE Campaign had presented to over 3,000 students, parents and teachers since the start of the 2019-2020 academic year, and the national outbreak of EVALI cases had reached over 2,400 hospitalizations and 50 fatalities. HIPHI continues to focus on policy and other interventions to address the root causes of the youth vaping epidemic and the impacts of addiction on our youth; look out for us during the 2020 legislative session. As we all prepare to take some time away from work, the 808NOVAPE Campaign extends our sincere thanks to those whose concern about this epidemic helped to us to raise awareness statewide. We wish you a happy holiday season, and look forward to hitting the ground running in 2020!