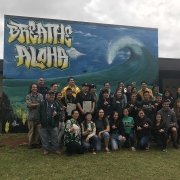 These are some of the handwritten messages students have left on a wall at Nanakuli High and Intermediate school… not random graffiti authored by students bored of their daily school work, but positive affirmations written onto one of six ‘Breathe Aloha’ murals painted on school campuses across the state.

Nanakuli High and Intermediate school sits on 60 acres of Hawaiian Homestead land and has a predominantly Native Hawaiian student population. Approaching the school for this mural partnership was no accident. In the midst of a statewide youth vaping epidemic where 25 percent of high school students are currently vaping, the rate skyrockets to 37 percent for Native Hawaiian high schoolers. 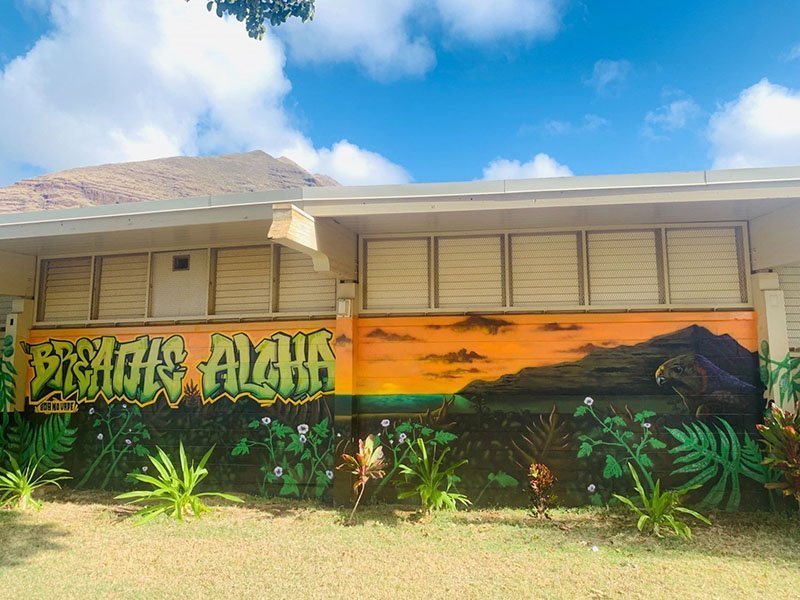 In the chilly morning hours on Friday, February 15, the fourth ‘Breathe Aloha’ mural was unveiled at Nanakuli High and Intermediate school. Principal Darin Pilialoha, along with several teachers and administrative staff members, was on hand to present the plaque commemorating the mural to ‘808NOVAPE’ campaign coordinator Kevin Ramirez. After a few words of gratitude and several minutes of group photos and selfies, the group dispersed to the art classroom to attend a short presentation on the health risks of vaping for teens.

Later that afternoon in Kauai, Ken Nishimura, the founder of Keep It Flowing Media and the artist responsible for the ‘Breathe Aloha’ murals was having a bad day. The weather couldn’t decide if it was going to rain or not, so in between intermittent rain showers, Ken and a small crew of artists would dry off as much of the wall as possible at the fifth mural location, Kapa‘a High School, with towels and then try to paint as much as they could before the drizzle picked up again.

When it wasn’t the rain making things difficult, it was the wind! The Mayor of Kauai, Derek Kawakami, who had proclaimed the month of February to be “808NOVAPE Month” dropped by the wall to lend a helping hand with painting. Under a gray sky on Tuesday, February 19, the first ‘Breathe Aloha’ mural on Kauai was unveiled at Kapa‘a High School. Immediately following the unveiling ceremony and mural blessing, a group of over 200 students gathered on the bleachers in the gym to listen to an ‘808NOVAPE’ presentation. 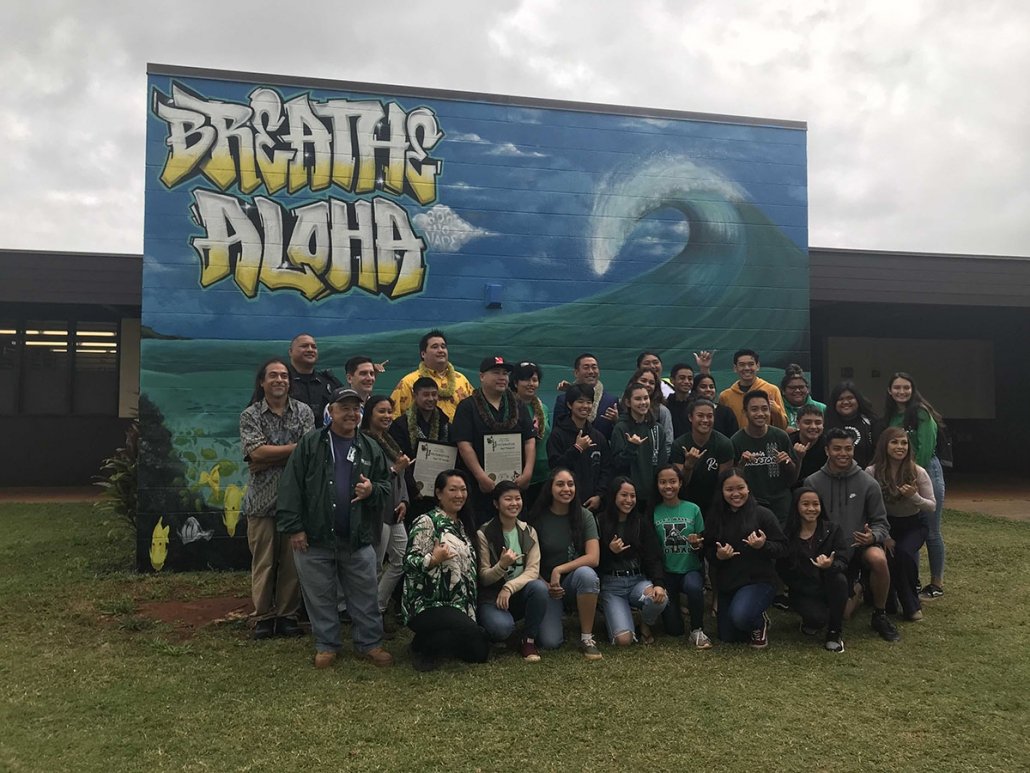 The sixth and final ‘Breathe Aloha’ mural was unveiled on the bright and sunny afternoon of Monday, February 25, at Hilo High School, on the east side of the Big Island. Planned for the lunch period to get the largest possible crowd of students, Principal Robert Dircks kicked off the ceremony. After a short blessing and hearing several speakers including Ken Nishimura and Ben, one of the artists from Keep It Flowing, the ceremonial ribbon was cut! 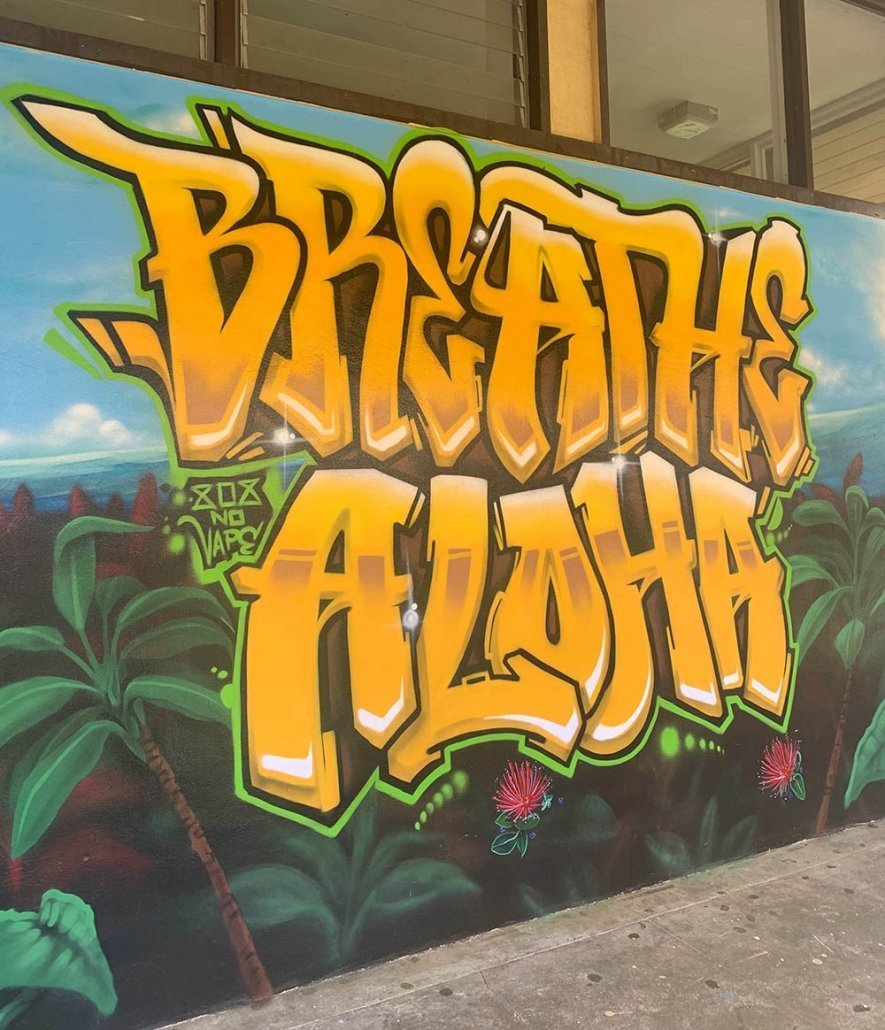 Following the unveiling ceremony, approximately 150 Hilo High School students gathered in the cafeteria for the ‘808NOVAPE’ presentation. This is the second mural on the Big Island; the other one is located in Kona at Kealakehe High School. The high school youth vaping rate in Hawai‘i County is also significantly higher than the 25 percent statewide rate, sitting at 34 percent. The Breathe Aloha murals bring creativity, visibility, and positive reinforcement together in a strategic way to encourage healthful living among populations hit the hardest by the vaping epidemic.

Learn more about the health harms of vaping at https://808novape.org. For additional information, contact Kevin Ramirez at kevin@hiphi.org.