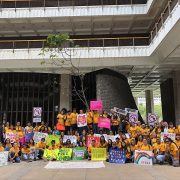 What an exciting year it has been for HIPHI’s Youth Council (YC).

We kicked off the school year in August with a Youth Retreat at Camp Mokuleia. Youth from across the state came together to develop leadership skills and participate in team-building activities… all toward becoming the first tobacco-free generation.

After getting to know one another, the YC met again in September for the HIPHI YC Planning Meeting to select policy priorities and strategies for 2018. During this meeting, Tobacco-Free School Buffer Zones was selected as the youth priority for the year.

When the State Legislature convened in January 2018, Senate Bill (SB) 2304 was introduced by Senators Rhoads, Green, Harimoto, Keith-Agaran, Kim and Riviere. In order to become law, SB 2304 would have to pass several committees and three readings in each chamber of the legislature. See the chart below for the bill’s movement through the legislature.

SB 2304 passed through two committee hearings and three readings in the Senate before being sent to the House.

The House referred SB 2304 to three additional committees. It passed through its first two committees, the House Committee on Health and Human Services (HHS) and the House Committee on Consumer Protection and Commerce (CPC).  The latter hearing coincided with Kick Butts Day so the room was filled with youth and several members of the Youth Council were on hand to testify in person. CPC passed the bill later that day and was referred to House Committee on Judiciary (JUD). Unfortunately, the JUD committee did not schedule SB2304 for a hearing, killing the bill for the 2018 Legislative Session

Overall, the bill received widespread support in both the House and Senate and progressed further than most bills do in the first year they are submitted. This, in and of itself, is an accomplishment and testament to the power of the youth voice at the Capitol.

Policy change is a long-term process, measured in years and decades versus weeks and months.

A good example of this is the previous YC’s priority, smoke-free vehicles for keiki. It was already law on the Big Island and Kaua‘i, but they wanted to expand the protections to children statewide. They worked on the issue for two years at the state legislature, building awareness and public support for the issue. Although it failed to pass at the state level, their efforts led to the remaining counties, O‘ahu and Maui, adopting ordinances that prohibited smoking and vaping in vehicles when minors are present. This is a major accomplishment that will directly impact keiki on our islands and the YC played a vital role in the process. 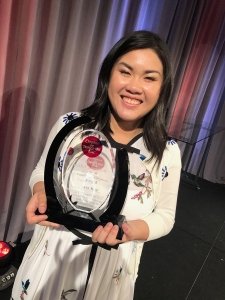 Due, in part, to her work on the issue of smoke-free vehicles, YC member Sara Kay was recognized as the national Youth Champion of 2018 at the Youth Advocates of the Year Awards in May.

At a red carpet gala in Washington, DC, Sara received the award, a $5,000 scholarship, and a seat on the Campaign for Tobacco-Free Kids Board of Directors for two years.

All in all, it has been a very successful year for the YC.

If you’re inspired by this past YC’s accomplishments and would like to join, please contact Scott Stensrud at Scott@hiphi.org or learn more at hiphi.org/youth.

2018 Legislative Recap has been released
Scroll to top