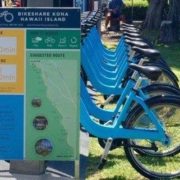 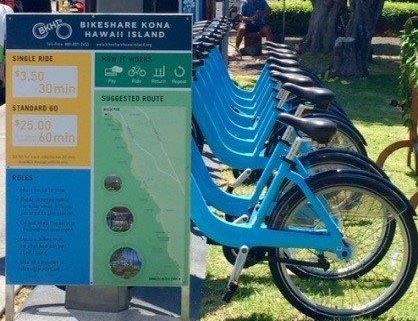 The program is primarily funded by $250,000 from the public Bikeway Fund, which is supplemented by bicycle and moped registration fees. That money, plus a substantial amount of volunteer work, manifested in the installation of 32 bikes across three stations along Alii Drive in the business district of Kailua Kona.

Bike rentals are available for $3.50 per half hour and payment can be completed at solar-powered kiosks with debit and credit cards. For residents, there is a program offering unlimited 60-minute rides for $25 per month. Hours of operation are essentially sunrise to sunset. Expansion of the program is expected, but will rely on usage as well as community sponsorship.

More bikes on the road have, in turn, spurred more discussion about safety. Clothier said PATH will work in the coming months with Councilman Dru Kanuha, the Kailua Village Business Improvement District and the Departments of Public Works and Planning to implement and improve safety measures along Alii Drive.

The “Tired Faces” Bike and Pedestrian Safety Campaign was also launched at the event. Hele-on Buses in Hawai‘i County have banners displayed on them, and the campaign will also be promoted county wide at movie theaters.

Tobacco Cessation is BACK on Kauai!
Scroll to top