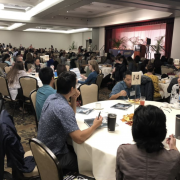 “With cigarette smoking, we were behind the ball and it took us decades to catch up,” said Jessica Yamauchi, executive director of Hawai‘i Public Health Institute. “We can’t afford to make that mistake again with e-cigarette use. We have to get ahead of this as best we can, passing policies that will reduce youth e-cigarette use and spreading the word that vaping is anything but safe.”

Featured at the Clearing the Cloud conference were Dr. Brian King from the Centers for Disease Control and Prevention’s Office on Smoking and Health, Dr. Bonnie Halpern-Felsher from Stanford University, Annie Tegen from Campaign for Tobacco-Free Kids, and Forrest Batz, PharmD, who has been a public health champion in Hawaii’s cessation community.

All had a similar message: History is repeating itself. Marketing is out of control. Our youth are at risk.

View images from the Conference here.

“Teens are attracted to vaping for a few reasons,” said Bonnie Halpern-Felsher, Ph.D., a Stanford University pediatrics professor who has studied young people’s attitudes toward e-cigarettes. “It’s cool to them. It’s novel. It’s high-tech and it has flavors. The other thing is they perceive it to be less risky [than cigarette smoking].”

“When you talk to youth about the risks, it’s very important not to just tell them that it’s bad… that it’s harmful,” Dr. Halpern-Felsher said. “It’s more important to tell them ‘look you’re being manipulated, …you’re being targeted.’ That’s what eventually worked with cigarettes.”

In June 2018, Hawai‘i Public Health Institute launched the #808novape counter-marketing campaign to combat the reckless and unrestrained marketing of e-cigarettes in the state. As of this morning, the campaign has been rolled out via movie theaters, mall displays, radio ads, and a massive social media campaign that has meaningfully engaged more than 50,000 youth. The campaign will continue into 2019 thanks to a Tobacco Prevention and Control Trust Fund grant through the Hawai‘i Community Foundation.

“The Hawai‘i Community Foundation, through the Tobacco Prevention and Control Trust Fund, is supporting efforts that educate youth and their families on the harms of tobacco and e-cigarettes,” said Larissa Kick, senior program officer for Community Grants and Investments at the Hawai‘i Community Foundation. “Informational events like this are key to increasing awareness about the harm of vaping and improving the future for our keiki, who deserve to live long and healthy lives. ”

View images from the Conference here.

About Coalition for a Tobacco-Free Hawai‘i
Coalition for a Tobacco-Free Hawai‘i, a program of Hawai‘i Public Health Institute, is a national trailblazer in reducing tobacco use through education, policy, and advocacy. Hawai‘i Public Health Institute (HIPHI) is a hub for building healthy communities. HIPHI helps others build capacity by providing issue-based advocacy, education, and technical assistance through partnerships with government, academia, foundations, business, and community-based organizations.

With over 100 years of community service, the Hawai‘i Community Foundation (HCF) is the leading philanthropic institution in the state. HCF is a steward of more than 850 funds, including more than 250 scholarship funds, created by donors who desire to transform lives and improve communities. In 2017, HCF distributed more than $59 million in grants and contracts statewide, including more than $6 million in scholarships. HCF also serves as a resource on community issues and trends in the nonprofit sector.

Helping to Clear the Cloud on Kaua‘i
Scroll to top