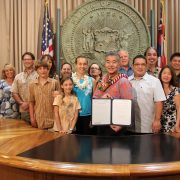 Hawaii’s farm to school movement is growing like green beans! Over the past decade, a collaborative grassroots network has driven the development of school learning gardens and school food improvements across the state. In 2010, the Hawai‘i Farm to School Hui was formed to strengthen this movement through the collective efforts of five island-level networks, community organizations, and state agencies.

In 2015, the Hawai‘i State Legislature and Governor David Ige established a Farm to School Program and Coordinator position in the Hawai‘i Department of Agriculture through Act 218, significantly expanding our state’s capacity to make progress toward our shared goals for agriculture, education, and health.

During the 2016-2017 school year, in partnership with Lieutenant Governor Shan Tsutsui, the Hawai‘i Department of Education (HIDOE) launched its Farm to School Initiative, piloting locally-sourced and scratch-cooked meals at schools in the Kohala Complex on Hawai‘i Island. Over the next several years and given the proper support, HIDOE plans to expand this initiative to schools across the state. 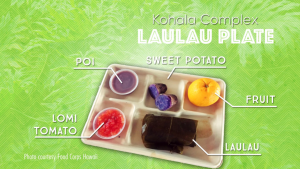 Studies show the positive impacts of farm to school programs in the areas of economic development, public health, community engagement, education, and the environment. As reported in the Benefits of Farm to School document published by the National Farm to School Network, the proven health-related benefits of farm to school programs include increases in fruit and vegetable consumption by students and demonstrated willingness to try new foods and healthier options. These benefits are especially evident when hands-on, food-based activities — such as school gardens and nutrition education — are offered in conjunction with healthier school food.

In October 2017, the Hawai‘i Farm to School Hui became our newest program at Hawai‘i Public Health Institute, providing a link to Hawaii’s agriculture and education sectors in order to improve the health of Hawaii’s students and community food systems.

Join us in helping to grow Hawaii’s farm to school movement during the 2018 legislative session. We’ll be supporting HIDOE’s request for two Farm to School Specialist positions in their School Food Services Branch!

Winter Update from our Executive Director
Scroll to top