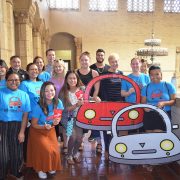 Honolulu, Hawai‘i – Today, the Honolulu City Council acted to protect our most vulnerable from the toxic effects of secondhand smoke and vapor. Their unanimous vote sends a strong message to kids across Oahu that they have been heard and that their health and wellbeing matters to their government.

We know that secondhand smoke in vehicles is up to 10 times as concentrated as what the EPA deems “unsafe”, even when the windows are down. Even worse, children are particularly at risk as their lungs and bodies are still developing. Today’s action will help ensure that kids, who have very little control over their own transportation, have a better shot at growing up healthy.

Mahalo to the Council for recognizing the danger to our children and voting in good conscience to put them first.