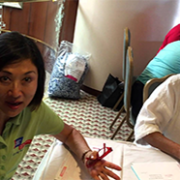 Anna Mayeda has been a dedicated coalition member since 2002 when she began working for the American Cancer Society (ACS). She has held various positions with ACS and recently retired as the Senior Marketing Manager.

When asked what were some of her greatest memories working with the coalition, Anna remarked that advocating and collaborating with community partners to pass the smoke-free workplace law in 2006 was among the highest.

A few other key initiatives that will remain with her are the Maui County tobacco-free beaches and parks law that passed in 2014 as well as the recently enacted law raising the age to purchase tobacco products to 21. Anna stated the importance of continuing our work to “ensure our children and youth are not affected by the risk factors of tobacco”. She feels it is important to continue collaborative efforts in policy and advocacy from all community partners so that the movement towards a tobacco-free county and state continues.

Moving forward, Anna hopes that the Coalition will continue working with elected officials and the community to pass tobacco- and vape- free laws and to raise awareness about the health harms. Vaping is a huge problem for Maui County’s youth and laws such as smoke- and vape-free cars with keiki will help curb this troubling trend.

In retirement Anna has promised herself one year to have fun with friends and family. She has been traveling to see her two grandchildren and is leaving soon to explore Denali National Park in Alaska. Soon thereafter, she will be traveling to Greece.

We honor and thank Anna for all her hard work with ACS and especially for volunteering her time with the Coalition. It will not be the same without her!

How an idea becomes law
Scroll to top