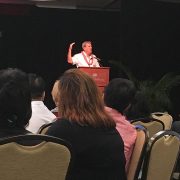 It’s day two at ho’ōla! This morning, we heard from Sam Quinones, author of Dreamland: The True Tale of America’s Opioid Epidemic. Mr. Quinones discussed how, beginning in the mid 1990s, marketing and car-salesman-like pharmaceutical reps turned OxyContin from a mostly non-addicting, effective pain killer (when dosed correctly) into something that millions of Americans depended on.

As doctors started to be rated by patients on how effectively the doctor treated their pain, doctors increasingly prescribed OxyContin (and other opiate drugs) more often and in higher and higher doses, leading us into this deadly epidemic. Some of our major takeaways from this fascinating session: 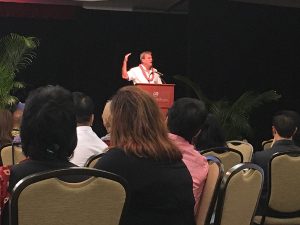 > We would not have a heroine problem in America without the rise of OxyContin.

> In the mid 90s, crime rates were dropping as overdoes rates were climbing. It wasn’t easy to see or even hear about in the early days.

> During the crack years, it was the crack house. Now, it’s the private bedroom… where the drugs are hidden, where they are used, and where people are dying.

> The private sector drug companies had unleashed the biggest threat to personal livelihood and freedom, and the only people talking about it were government workers (nurses, public health workers, drug counselors, etc).

> All profits have benefited private companies and all costs have been shouldered paid by taxpayers, either directly or indirectly.

Mr. Quinones makes a compelling case that as our society’s priorities have shifted away from community and towards consumption and accumulation of “stuff”, we have became more divided, more depressed, and more dependent on drugs to alleviate our physical and mental pain.

“You can live with pain, you cannot live without a pulse.”

Expansion of technology further divided us in many ways. We pretend that we are somehow informed by 24-hour cable news, but it just creates little bubbles of people who rarely talk to each other. Meanwhile, parks are underused. Community functions are under attended. We barely know our neighbors.

This disconnectedness has led many to heroine, a product that thrives in our culture of self-gratification. It makes our worries, the loneliness, the pain… just go away. According to Mr. Quinones, it’s the “we don’t need others” or “I can do it on my own” mentality that is often the root of opiate addiction.

“Heroine is what you get when you destroy dreamland,” says Quinone. “And the antidote is not Naloxone, it’s community. Depending on one another, watching out for one another is a good start. Your neighbors, schools, churches need you… badly.”