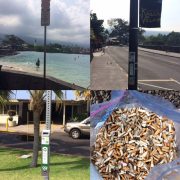 Cigarette butts, made of non-biodegradable plastic,  are the number one littered item in the world. Thankfully, volunteers of the West Hawai‘i Tobacco-Free Partnership, Surfriders Kona Kai Ea, Hawai‘i Wildlife Fund and Keep Puako Beautiful are pitching in to keep our communities clean and our planet healthy.

Over the last three years, the West Hawai‘i Tobacco-Free Partnership has been picking up cigarette butts along the Kona and Kohala coasts. In 2015, volunteers from the partnership collected more than 13,000 butts in a one mile range along the coast between the Kailua Kona pier and the Coconut Grove shopping center.  This year, during the Hawai‘i County Community Clean-up on March 4th, volunteers collected over 30,000 butts at the coastal parkways along Ali`i Drive in Kona.

In hopes of alleviating tobacco product waste along the shore of the Kailua Kona Bay, the West Hawai‘i Tobacco-Free Partnership, a program of the Hawai‘i Public Health Institute, is testing out the effectiveness of three cigarette butt receptacles (produced by TerraCycle).  These receptacles are located along Alii Drive near the Kailua Bay Pier, Hale Hale Halawai Park and across from the seawall near Fish Hopper Restaurant.

“Hawai‘i County has some of the most progressive smoking and tobacco-free laws in the nation.  Now that people who smoke cannot do so in many places, they have to go outdoors and away from the public,” says Tami MacAller, West Hawai‘i Community Coordinator for Hawaii Public Health Institute. “This leaves people without receptacles in which to deposit their cigarette butts properly.  Having these receptacles along Alii Drive will hopefully create some awareness to reduce the toxic litter on the environment.”

Waste collected from these receptacles are shipped to TerraCycle, a recycling and upcycling company, and then repurposed into a variety of affordable, environmentally responsible products ranging from plastic decking, park benches, watering cans, or recycling bins.

“Cigarette butts are littered everywhere.  It seems to be part of the smoking behavior to drop, flick or throw cigarette butts on the ground, which eventually ends up in the ocean” says Holly Kersten, President of SurfRiders Kona Kai Ea, who applauded the receptacle project. “Most people have no idea that cigarette butts are made of plastic and that their toxicity can kill fish and other wildlife.”

Learn more about the program here.

Update from the Executive Director
Scroll to top