As students returned to school this fall, Maui Police Department (MPD) ran a two-week long special operation within school zones to promote seat belt, cell phone, and speeding laws. This year they also highlighted Maui County’s new law, which prohibits smoking in vehicles when minors are present. CTFH worked with MPD on the campaign to help educate the community.

As students began the new school year in Maui County, new banners began to appear on Maui, Molokai, and Lana‘i. The banners read “Smoke-Free Ride When Keiki Inside: It’s the Law! $200 fine for Maui County.” The banners were provided by the Maui, Molokai, and Lana‘i Coalition for a Tobacco-Free Hawai‘i (CTFH), and were posted by MPD as part of a special operation to enforce traffic violations in school zones and remind our community about the laws that exist to help protect our drivers, our pedestrians, and especially our kids.

There are over 7,000 identifiable chemicals in secondhand smoke and at least 69 of them cause cancer. According to the U.S. Surgeon General, any level of secondhand smoke is dangerous and can be harmful. Children exposed to secondhand smoke have an increased risk of Sudden Infant Death Syndrome (SIDS), ear infections, and more frequent and more severe asthma attacks. Smoke-free vehicles provide a healthier environment for everyone and help to create social norm changes so that our children will be less exposed to cigarettes and electronic smoking devices, as well as the act of smoking and vaping.

To launch the special operation and draw awareness to the law, CTFH held a sign waving along Maui Veterans Highway beside one of the “Smoke-Free Ride When Keiki Inside” banners. Coalition members and their children were joined by Officers Timothy Hodgens and Marlon Madriaga, as well as Lieutenant William Gannon and Councilmember Yuki Lei Sugimura for the event. Maui Nui Youth Council members Kawena Kekuewa and Tyler Fisher were also present, both of whom were an integral part of the youth movement that helped get the law passed through Council.

In addition to the thousands of drivers reached by the banners and the MPD special operation media coverage, the Maui, Molokai, and Lana‘i CTFH conducted a concurrent social media campaign through Facebook and Instagram, reaching about 20,000 Maui County residents between the ages of 18 and 65. Smoke-Free Ride When Keiki Inside car magnets and bumper stickers are also popping up on vehicles across the County. 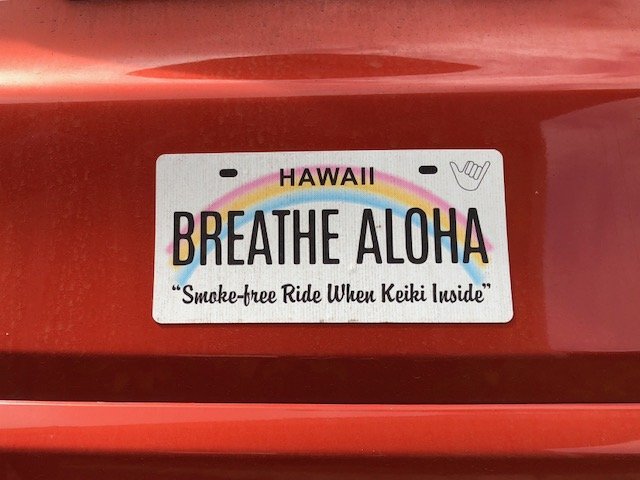 Breathe Aloha car magnets are showing up on vehicles across Maui County to promote the new law. Design created by the Department of Health and magnets provided courtesy of the Maui, Molokai and Lana‘i Coalition for a Tobacco-Free Hawai’i.

Through this educational campaign and special operation, our hope is that MPD will not have to issue a single ticket. If the community is aware of the law, why it is important for the health of our keiki, and that there is a hefty fine for violations, then Maui County should see a decrease in this kind of behavior. As a result, a new normal will start to emerge where smoking in vehicles with children present is unheard of and the negative health impacts of secondhand smoke exposure for our keiki will also decrease.