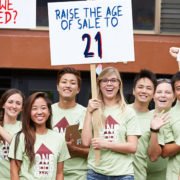 Today, Hawai`i becomes the first state in the nation to raise the legal age to purchase or consume tobacco products to 21. This is a crowning achievement for the our public health community and could reap great rewards for the people of our state.

The long-term costs of tobacco use, both in terms of lives lost and dollars spent, has been a great burden on our people:

As the brain is developing, it is much more susceptible to addiction. With 95% of all tobacco users beginning while under 21 years of age, this new law could have real impact on our youth smoking rates. It also could impact youth use of electronic smoking devices (ESDs; also called e-cigarettes), which are included under the Age 21 requirement as well as a second law going into effect January 1, 2016.

ESDs are now also included under Hawai`i’s clean indoor air law, covering most indoor spaces such as workplaces, restaurants and bars. The vapor from ESDs contains nicotine and cancer-causing chemicals and, like secondhand smoke produced by cigarettes, has no place in enclosed environments where others will be exposed.

Coalition for a Tobacco-Free Hawai`i — a program of Hawai`i Public Health Institute — led the campaign to pass the Age 21 requirement first on the Big Island in 2013 and then statewide in 2015.

In 2016, we will be working to further protect kids by working to regulate ESDs, prohibit smoking in vehicles with a passenger under 18 years of age, reduce sugary beverage consumption and so much more!

Mahalo to all who partnered with us and to the legislators who stood up to tobacco company interest to protect our keiki.

If you are over 18 and need help quitting tobacco or e-cigarettes, contact the Hawaii Tobacco Quitline at 1-800- QUIT-NOW or go to hawaiiquitline.org to connect with a quit coach and receive nicotine replacement therapy, free of charge.