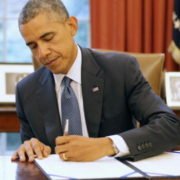 Under the 2009 Family Smoking Prevention and Tobacco Control Act  the Food and Drug Administration (FDA) was given immediate oversight authority over cigarettes, cigarette tobacco, smokeless tobacco, and roll-your own tobacco. The law was a major achievement for the Obama Administration and for the public health community as it was the first time in American history that the manufacture, marketing and sale of tobacco products were subject to regulation. The Act also gave the FDA the ability to extend its jurisdiction to other tobacco products, both those on the market and those to be released in the future.

Today, the FDA did just that by issuing its rule: Deeming Tobacco Products To Be Subject to the Federal Food, Drug, and Cosmetic Act, which goes into effect August 8, 2016. The rule is approximately 500 pages long and is still being deciphered, but here are the highlights:

What the new rule does:

– Brings e-cigarettes, cigars, and hookah under the agency’s authority and, therefore, under most of the same provisions applied to cigarettes and smokeless tobacco;

– Requires manufacturers to register with FDA and submit product listings and ingredients;

– Requires premarket review and approval by FDA of all new products;

– Prohibits sale of tobacco products, including e-cigarette devices, in vending machines unless it is in an adult facility.

What it does NOT do:

– Prohibit online sales of e-cigarettes and refill liquids to youth, despite studies showing many online vendors have inadequate age verification; and

– Prohibit menthol, despite the FDA’s own conclusions that use of menthol leads to increased smoking initiation among youth and young adults and greater addiction.

– FDA announced plans to extend the current federal ban on candy- and fruit-flavored cigarettes to include flavored cigars, although this will require additional rule-making and the FDA did not commit to a specific timetable.

Today’s rule is an important first step towards tackling the rise in cigar and e-cigarettes use among our keiki, but it doesn’t go far enough. The FDA needs to quickly follow through with it’s pledge to prohibit fruit- and candy-flavored cigar products and it must address the rampant, irresponsible advertising of e-cigarettes.

FDA is interested in reports from consumers, manufacturers, clinical investigators, and health professionals about tobacco products that: