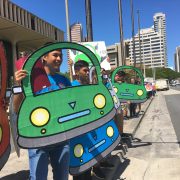 Honolulu should ban smoking in cars

With most of our keiki returning to school, the Coalition for Tobacco-Free East Hawaii is thrilled to see the Honolulu City Council introduce a bill to eliminate smoking in vehicles when a minor is present.

This August we celebrate the seventh anniversary of smoke-free vehicles in Hawaii County, and public support is overwhelming.

According to 2016 polling data, 83 percent of our residents support this law, which was passed to protect children’s developing lungs from harmful secondhand smoke that contains approximately 7,000 chemicals, of which 200 are poisonous and nearly 70 are a class A-carcinogen.

Similar to seatbelts, child car seats and cellphone use laws, this ordinance would protect our vulnerable keiki from harm, especially when exposure to secondhand smoke is not their choice.

Mahalo to the Honolulu City Council for its work to become the third county to protect keiki from secondhand smoke in cars.