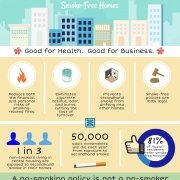 According to a recent survey conducted by the Maui, Molokai, Lāna’i Coalition for a Tobacco-Free Hawaiʻi, 95 percent of respondents, (Maui County residents) who live in multi-unit housing (multiple housing units contained within a building or buildings in a complex), as well as complex property managers and owners, believe that it is a human right to breathe clean air. This question was one of many included in the surveys, which were designed by the Coalition to collect data related to secondhand smoke exposure, current smoking policies, and level of support for smoke-free policies directly from residents, property managers and owners who rent out their units. The survey data demonstrates support for smoke-free multi-unit housing policies, as well as why they are so desperately needed to help protect residents, visitors, and employees from secondhand smoke exposure.

The surveys were sent to management companies across the county, and were also promoted through social media and public health networks. A total of 73 residents responded, representing nearly all areas of Maui where market-rate multi-unit housing complexes are located. In addition 46 managers or property owners who rent their units also responded.

Of the resident respondents, the majority are Hawaiʻi residents who live in their units full-time (62 percent). More than half own their unit (55 percent), while only 19 percent indicated that they are an out of state or part-time resident. Most participants are non-smokers (94 percent), but a few reported smoking cigarettes or tobacco, e-cigarettes, or marijuana. Of particular concern, over half of the respondents (52 percent) indicated that secondhand smoke causes symptoms that are bothersome, while several even require medication to manage or may have life threatening consequences from exposure to secondhand smoke.

Complexes across the county vary widely in their smoking policies. According to survey results, 72 percent of the complexes have an official smoking policy in addition to the state law prohibiting smoking in all enclosed common areas and within twenty feet of entrances. Despite this, approximately 48 percent of Maui County complexes allow smoking inside units or on private lanais. For outdoor areas, approximately two-thirds of complexes allow smoking in designated smoking areas, while only a few ban smoking in all outdoor areas on the property.

There is no safe level of exposure to secondhand smoke. According to the U.S. Surgeon General (2010) any level, even brief exposure, of secondhand smoke is dangerous and can be harmful. Secondhand smoke exposure is responsible for an estimated 46,000 premature deaths from heart disease and 3,400 lung cancer deaths in the United States among nonsmokers annually.

The U.S. Department of Housing and Urban Development recognized the need to protect residents and employees from secondhand smoke by making all public housing smoke-free in 2018. This rule protects close to two million public housing residents nationwide, including 760,000 children, from exposure to secondhand smoke. As of August 15, 2020, 63 municipalities have enacted a law at the city or county level prohibiting smoking in 100 percent of private units of multi-unit housing properties.

The Maui County data collected by the Coalition demonstrates strong community support for our own smoke-free air law that will eliminate cigarette smoke exposure for all multi-unit housing residents, visitors, and employees, and will support property owners and managers efforts to enforce smoke-free policies. It’s time for all of our residents to enjoy smoke-free housing!