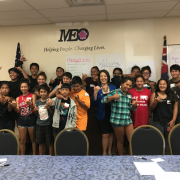 Through collaboration between Council-member Sugimura’s office, the Coalition for a Tobacco-Free Hawai‘i, and the youth of Maui County, an ordinance for smoke-free vehicles when minors are present will be pursued at the county council this year.

For the first time ever, the Maui, Molokai, and Lana’i Coalition for a Tobacco-Free Hawai’i held a special planning meeting for Maui County youth. The youth planning meeting was organized so that our county youth would have a voice in determining a priority area for the coalition to pursue around tobacco control, prevention, and education in the coming year. In a sweeping vote, the youth attendees, comprised of MEO youth leadership and Maui Nui Youth Council members, determined that passing a bill to protect minors from smoking in vehicles was by far their number one priority.

According to the U.S. Surgeon General, any level of secondhand smoke is dangerous and can be harmful. There are over 7,000 chemicals in secondhand smoke and at least 69 of them are known to cause cancer. In the confinement of a vehicle, secondhand smoke is 10 times more concentrated than the level considered unhealthy by the EPA, even with the windows down. Sadly, children exposed to secondhand smoke have an increased risk of serious health problems, including severe asthma, respiratory and ear infections, and even Sudden Infant Death Syndrome (SIDS).

The bill to be introduced would make it illegal for an adult to smoke (including electronic smoking devices) in a vehicle when a child under the age of 18 is present. Eight U.S. states currently have legislation in place to protect children from smoking in vehicles. On the local level, the Big Island has had such an ordinance in place since 2010 with full support of the Hawai‘i Police Department, Kauai just passed a similar bill last year, and Oahu is actively working to get their own version passed. Maui County would not be the first, nor the last, to implement such a restriction.