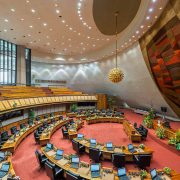 Every year, Hawai‘i Public Health Institute surveys elected officials or candidates running for office, depending on the year. The purpose of the survey is to determine where elected officials and candidates stand on various public health issues and to inform voters and encourage transparency and accountability. The State Legislature has the power to enact laws, adopt resolutions, propose amendments to the State Constitution and approve the State Budget – all things that can impact the lives and health of Hawai‘i residents.

This year, as it was a non-election year, we sent the survey to the state legislature, Governor, and Lieutenant Governor for a total of 78 surveys. They were asked two types of questions: 1) to assess their attitudes and beliefs on various public health issues, and 2) rank various policies that address public health issues in order of support.

Elected officials were offered both paper and electronic versions of the survey, and had two weeks to respond. In an attempt to increase participation, we provided additional drop-offs of paper copies, e-mail reminders, phone calls and have accepted responses on a rolling basis. Despite our numerous follow-up measures, only 26 out of 76 State Legislators responded, with no response from the Governor or Lieutenant Governor.

Highlights from the Survey

Hawai‘i Pubic Health Institute is a 501(c)(3) nonprofit organization and does not endorse candidates or other elected officials. In some cases, nonprofits may endorse bills or pieces of legislation.